The Transformative Journal (TJ) model is one of the strategies cOAlition S endorses to help subscription publishers transition to full and immediate Open Access (OA). To be awarded TJ status, a title must publicly commit to transitioning to fully Open Access, and agree to:

As of June 2022, some 16 publishers – large and small, for-profit, not-for-profit, society publishers and university presses – totalling some 2304 journals, have enrolled in this programme. Figure 1, shows the breakdown of TJs by publisher. [Note: The “Other publishers” category is made up of 9 other publishers, who between them have 26 Transformative Journals]. 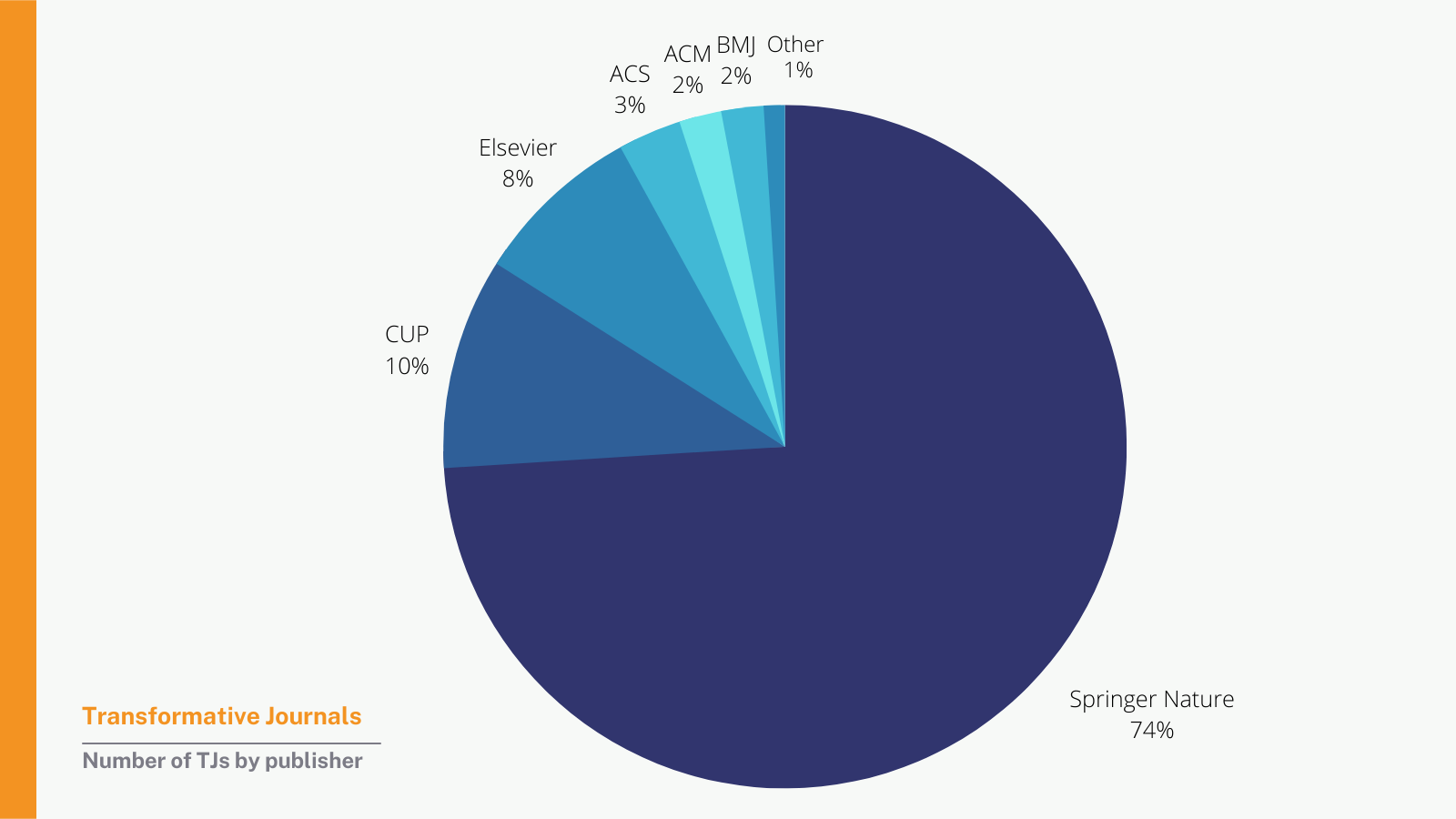 Figure 1: Number of TJs by publisher

This blog post provides a summary of the first full year of the TJ programme, using data supplied by all participating publishers. [Note: As the ACS only joined the TJ programme in April 2022, the analysis below excludes this publisher].

Any publisher who wishes to join the TJ programme should apply using the form available at: https://www.coalition-s.org/tj-forms

A key element of the TJ model is that designated journals must publish data showing the OA penetration rate and whether they have met their agreed targets.  Specifically, TJ titles are required to demonstrate an annual increase in the proportion of OA research content of at least 5% points in absolute terms and at least 15% in relative terms, year-on-year.

Although analysis of Year 1 data shows that 44% of TJ titles met or exceeded their targets, some 56% of TJs did not meet their Year 1 targets.  This is perhaps understandable as the TJ model is new and may take some time to be fully established.

In light of this, cOAlition S agreed that if a TJ did not meet its Year 1 (2021) OA target, then the title can remain in the programme, provided that the journal agrees that the Year 2 target is calculated as if the Year 1 target had been achieved.  Any title which misses their 2022 OA target will be removed from the programme. Figure 2 shows, by publisher, the number of TJs that met their year 1 growth target. 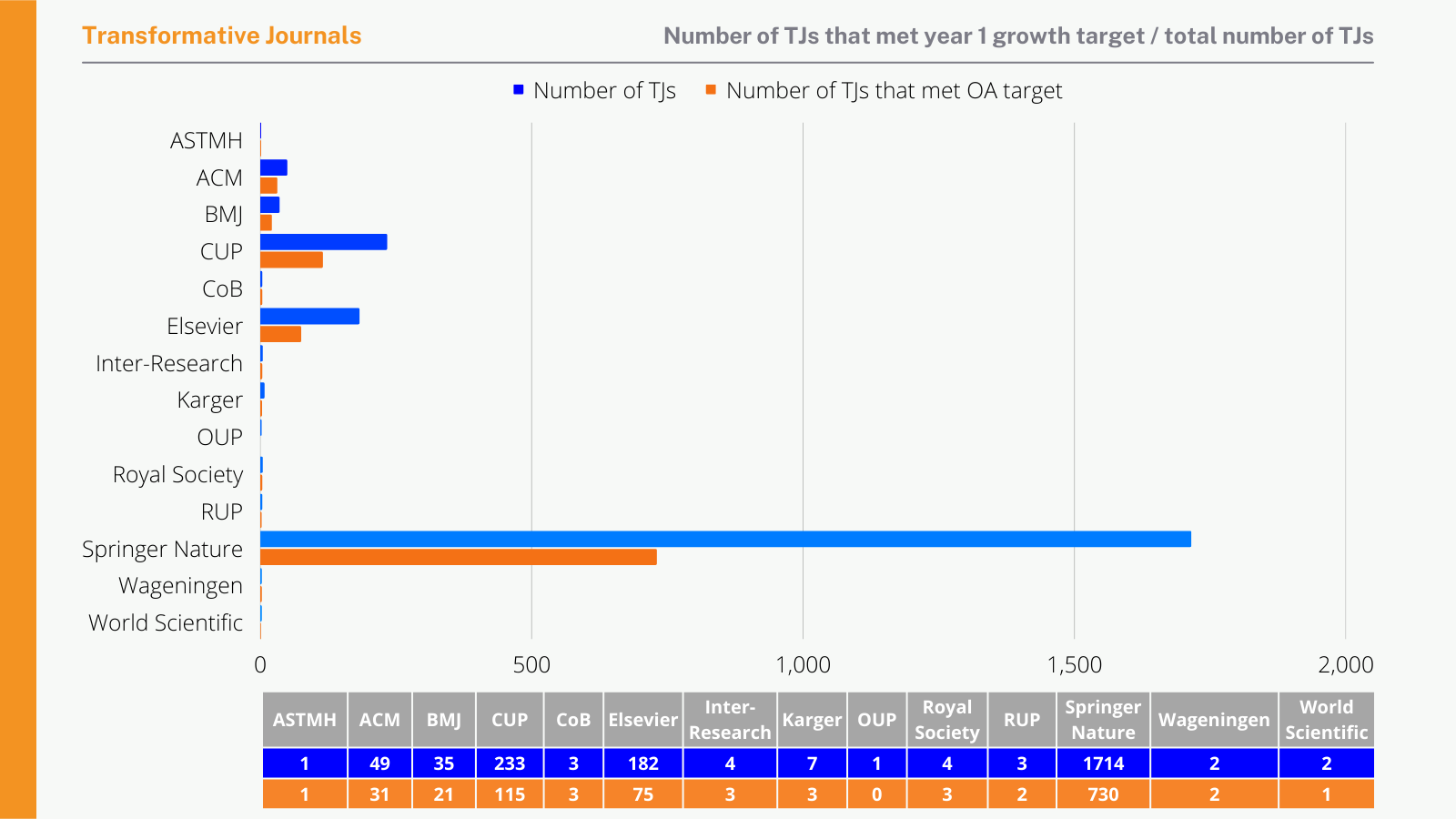 As noted last year, another overarching observation is that the journals participating in the TJ programme are at very different points in their transition to OA.  For example, if we look at the publisher with the single largest TJ portfolio – Springer Nature (SN) which has 1714 titles in the programme – we see that there are 91 titles (5%) which already enjoy an OA penetration rate greater than 50%.  On the other hand, the SN portfolio also includes 545 titles (32%) whose OA penetration rate is 10% or less, including 85 journals (5%) that have not made a single research article OA with a CC BY licence.

For many journals in the TJ portfolio, this will be challenging, as can be seen in Figure 3, which shows the number of TJ titles whose OA penetration rate is equal to or greater than 25%. And, though there is nothing magical about the 25% figure, it is being used here to suggest that these journals are more likely to make the transition to full OA. 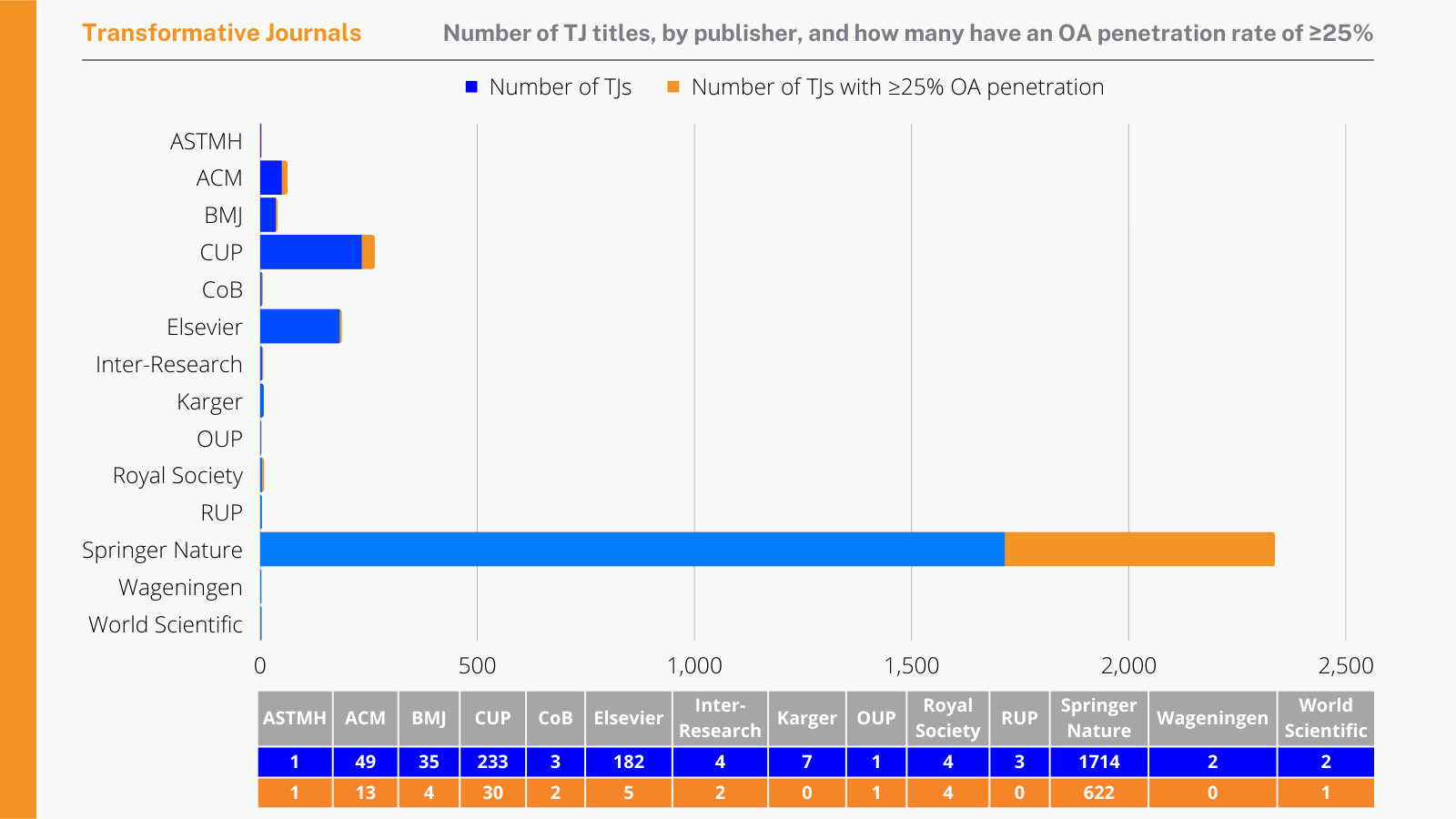 Figure 3: Number of TJs whose OA penetration rate is 25% or greater

More positively we can report, for example, that ten SN titles will flip to OA – having exceeded the 75% OA penetration rate – and that two titles published by Oxford University Press and one title from ACM have already flipped to fully OA.

The data also demonstrably shows that, on average, OA content is downloaded about three times more often than subscription content in the same journal.  The citation data is less clear cut, though SN reports that across the last three years (2019, 2020 and 2021), the average number of citations was higher for OA articles, than for subscription content.

Participating publishers are also required to show how subscription prices are impacted as a result of some content being published OA.  Expressed simply, if the volume of published content remains static, then as the proportion of OA content increases, we should expect to see a decrease in the price of subscriptions.  The Royal Society, for example, show how the subscription price for the journal Interface Focus fell by 16% in 2022 (even after inflation of 1.5% has been added) because of the increase in the proportion of OA content.

Other publishers in the TJ programme – such as Elsevier and SN have provided a more generic, anti-double dipping statement – and though this is helpful, all TJ publishers will be required to show how the availability of OA content has impacted the subscription price – at the journal level – in their 2022 TJ annual report.

Annex A provides a summary of the TJ report provided by each publisher.  The source data is publicly accessible from the publisher sites (linked below) and we encourage readers to access this information and do their own analysis.

We have also created a consolidated spreadsheet to facilitate further analysis. This is provided on a best endeavours basis, and if there are any discrepancies between the data presented here and the information on the publisher site, the data on the publisher site should be considered the canonical source.

Annex A: Analysis of Year 1 data, by publisher

The table below provides an analysis of Year 1 data by publisher.  The data underlying these observations are freely available from the relevant publisher website.

Robert Kiley is Head of Strategy at cOAlition S, working to accelerate the transition to full and immediate Open Access. Prior to this, he was Head of Open Research at the Wellcome Trust, where he was responsible for developing and implementing their open research strategy. Over the past decade, Robert has played a leading role in the implementation of Wellcome's open access policy and overseeing the development of the Europe PubMed Central repository. He also led the development - in partnership with Howard Hughes Medical Institute, the Max Planck Society - of eLife, the open-access research journal, launched in 2012. More recently he championed the work to create a new open publishing platform for Wellcome researchers – Wellcome Open Research. Robert is a qualified librarian and an Associate Member of CILIP. He is a Board member of Open Research Central and served for 6 years on the ORCID Board of Directors.

View all posts by Robert Kiley