The Rights Retention Strategy (RRS) ensures that researchers who have been funded by a cOAlition S Organisation will always be able to honour their funders’ Open Access (OA) policy.  This is achieved by requiring researchers to give notice to publishers that an Author Accepted Manuscript (AAM) arising from their submission carries a CC BY licence, in accordance with their grant conditions.  By way of example, Wellcome grantees must include the following text in all manuscript submissions:

“This research was funded in whole, or in part, by the Wellcome Trust [Grant number]. For the purpose of Open Access, the author has applied a CC BY public copyright licence to any Author Accepted Manuscript version arising from this submission”.

This post outlines how the Journal Checker Tool (JCT) will make the RRS information visible to researchers and how it will preference publishing options where the Version of Record (VoR) can be made Open Access.

As all research articles submitted for publication from researchers whose funder has adopted the RRS will give notice to a publisher about the CC BY licence, all publishing venues can be deemed to offer a “Plan S compliant” publishing option. For the avoidance of doubt, the JCT is not asserting that the publisher policy supports the RRS. Rather, it indicates that the RRS allows researchers to self-archive the AAM with a zero-month embargo and a CC BY licence.

To date, we are pleased to report that no publisher has indicated that they will systematically reject submissions because the submission includes the RRS language.

2. Preference for the VoR over the AAM

We recognise that the AAM version differs from the VoR.  Not only does the latter contain all the changes from the copyediting process, journal formatting/branding etc., but it is also the version maintained and curated by the publisher, who has the responsibility to ensure that any corrections or retractions are applied in a timely and consistent way. For these reasons, our preferred option is to ensure that the VoR is made Open Access.

As such, when a publisher offers a Plan S-aligned way of making the VOR Open Access, the JCT will indicate this is the preferred route to compliance.

Figure 1: How options making the VoR OA are preferenced in the JCT
Example: Immunology, a journal which is part of a Wiley Transformative Agreement, accessible to researchers at Cardiff University

Some journals – such as those published by the Royal Society and the Microbiology Society – have explicit policies allowing all researchers to self-archive their AAMs, without embargo and with a CC BY licence.

To determine this, the JCT checks publishers’ self-archiving policies (via the Shareyourpaper.org permissions service) to see if they support compliance with Plan S. Where they do, the JCT displays the publisher’s policy as providing a route to compliance via self-archiving.  In such cases, cOAlition S funded authors can therefore take advantage of such policies and deposit the AAM in a repository in compliance with their grant conditions. This approach does not rely on the RRS.

The publisher’s Plan S-aligned self-archiving route to compliance is shown along with any other options (such as Transformative Journal status, or relevant Transformative Agreements).  Again, routes where the VoR can be made Open Access are flagged as preferred. This is shown in Figure 2 below. 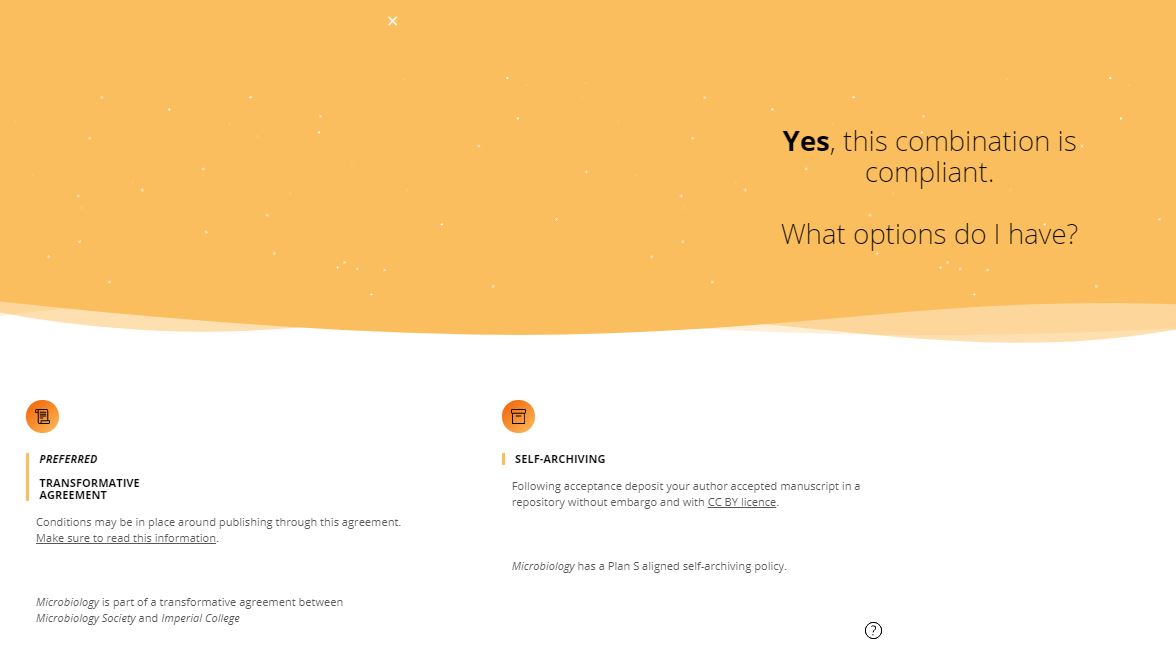 Figure 2: JCT showing response to a Microbiology Society journal, where publisher-endorsed self-archiving, in line with Plan S, is supported

4. Ensuring the JCT is up to date

Over the coming weeks, we anticipate that some publishers will update their public policies relating to self-archiving, so they are fully aligned with Plan S.

For a publisher, the advantage of developing a Plan S-aligned self-archiving policy is that it affords them the opportunity to include the condition that the AAM is cross-referenced with the VoR.  Such a requirement would be absent when AAMs are made available via the RRS route.

Where publishers do update their public policies, the JCT will reflect these changes via the integration with the Shareyourpaper.org permission service.  However, if publishers wish to ensure that these changes are reflected as quickly as possible in the JCT, they should use the Shareyourpaper.org update request form. The form includes a bulk update option for those wishing to update a journal portfolio.

The previous data collection mechanism whereby publishers responded to the cOAlition S office and selected from a set of options, has been discontinued.  This is partly to simplify the process – and provide a single source where self-archiving policies are discovered – and partly a recognition that the initial approach was not widely supported by publishers.  Indeed, of the 153 letters sent, only 28 publishers (18%) responded with an “actionable” response.  Most publishers did not respond, and of those who did, many did not provide an answer which could be incorporated into the JCT.

Complying with cOAlition S Organisations’ Open Access policies can look complicated.  Not only are there multiple routes to compliance with funder policies, but some of these – such as Read and Publish deals – are only accessible to researchers at institutions which participate in these agreements.  Other routes, like the RRS, apply even when the publisher’s own policy suggests otherwise.

To help navigate this complex landscape, cOAlition S has supported the development of the JCT and encouraged publishers to update their policies.  With a clear focus on researcher needs, the JCT provides unambiguous advice to researchers on how they can comply with their funder’s Plan S-aligned Open Access policy when seeking to publish in any peer-reviewed journal.

Robert Kiley is Head of Strategy at cOAlition S, working to accelerate the transition to full and immediate Open Access. Prior to this, he was Head of Open Research at the Wellcome Trust, where he was responsible for developing and implementing their open research strategy. Over the past decade, Robert has played a leading role in the implementation of Wellcome's open access policy and overseeing the development of the Europe PubMed Central repository. He also led the development - in partnership with Howard Hughes Medical Institute, the Max Planck Society - of eLife, the open-access research journal, launched in 2012. More recently he championed the work to create a new open publishing platform for Wellcome researchers – Wellcome Open Research. Robert is a qualified librarian and an Associate Member of CILIP. He is a Board member of Open Research Central and served for 6 years on the ORCID Board of Directors.

View all posts by Robert Kiley