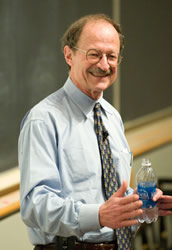 Harold Varmus, M.D., co-recipient of the 1989 Nobel Prize in Physiology or Medicine for studies of the genetic basis of cancer, joined the Meyer Cancer Center of Weill Cornell Medicine as the Lewis Thomas University Professor of Medicine in April, 2015.   He is also a Senior Associate Member of the New York Genome Center, and an adjunct professor at the Macaulay Honors College at the City University of New York.

He is a member of the U.S. National Academies of Sciences and Medicine, and member of advisory boards for Chan-Zuckerberg Science, the Broad and Crick Institutes, and three biotechnology companies (Surrozen, Dragonfly, and PetraPharma).    The author of about 400 scientific papers and five books, including a 2009 memoir entitled The Art and Politics of Science, Varmus was a co-chair of President Obama’s Council of Advisors on Science and Technology, a co-founder and Chairman of the Board of the Public Library of Science, and chair of the Scientific Board of the Gates Foundation Grand Challenges in Global Health.