In March 2021, Chris Banks, Library Director at Imperial College London, wrote about the importance of a rapid shift toward full and immediate open access to research. She argued: “We’re paying a lot of money to have impenetrable walls put round our content”. But the walls don’t just restrict access; they can also cause a great deal of confusion for any potential readers.

Trying to read this article uncovered some serious problems with accessibility.

Is the article open or not?

Danny Kingsley had tweeted the article, checking first that it was available (a matter of principle for her before sharing research is establishing that others can read it). Here we describe the steps Sally Rumsey then took to try and access the work.

Sally started with her mobile phone, where she was presented with the article details and rent or buy options. Not wanting to pay, she assumed that was it. There were no other options for accessing the full text other than institutional sign-on, which Sally no longer has. However, on enquiring over Twitter, Danny indicated it was freely available via “the PDF tab”. But this definitely did not appear on Sally’s phone interface. So she decided to check on other devices.

The first time Sally tried to access the article on her laptop, she was presented with the same article details and rent or buy options on the mobile phone, but here there was a PDF tab. Clicking on the tab immediately opened the full-text PDF. There was no mention of any OA version or institutional affiliation – she didn’t have to click on the “Access through your institution” button. 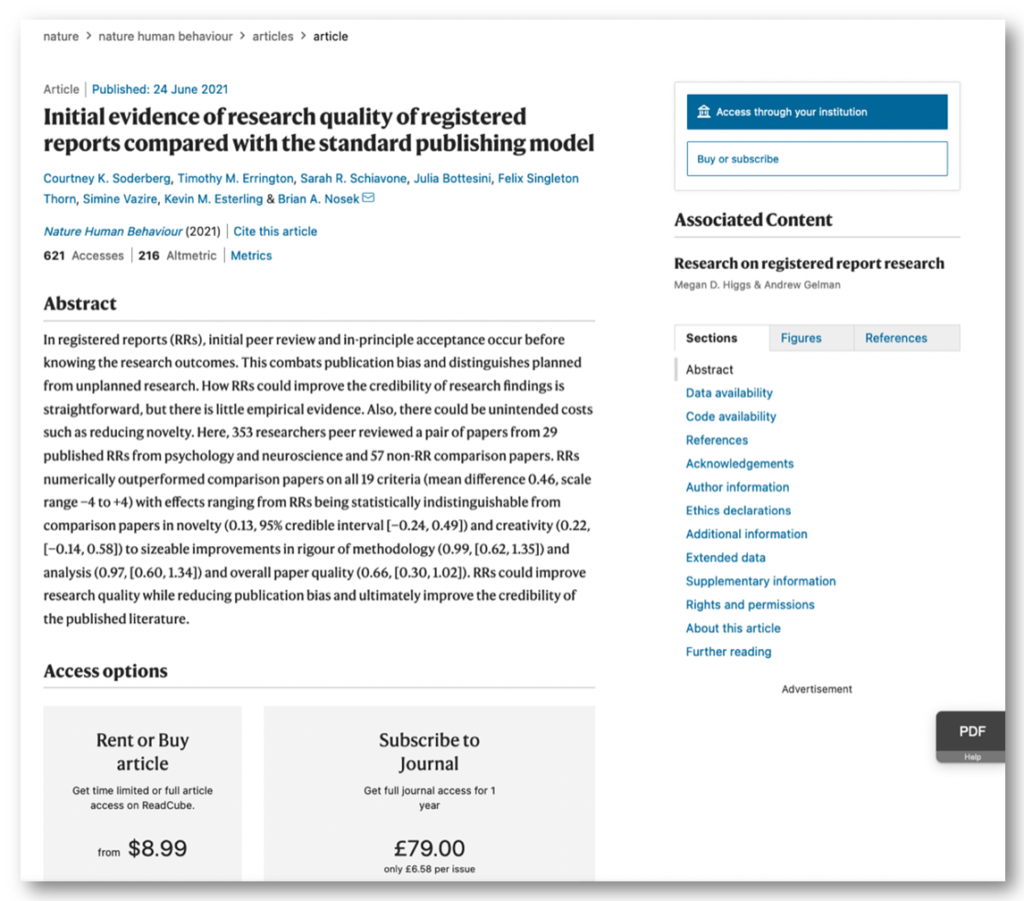 Step 3: Let’s give it another try. Same laptop, second attempt…

But wait…. When Sally clicked on the same link, on the same laptop for a second time, there was no need for a PDF tab because she was taken immediately to the full text. Apparently, this is because she has “full access to this article via …the University of Oxford“. This was highly perplexing given Sally is no longer a member of that University and has not had access to any resources with that affiliation for 18 months. We surmise that a cookie Nature (nature.com) previously installed on this browser “remembers” the affiliation and automatically authenticates.

Sally then checked on a different laptop, where the experience matched her mobile phone. There was only the opportunity to pay to access or sign in with an institutional log-in. The PDF tab was not offered. 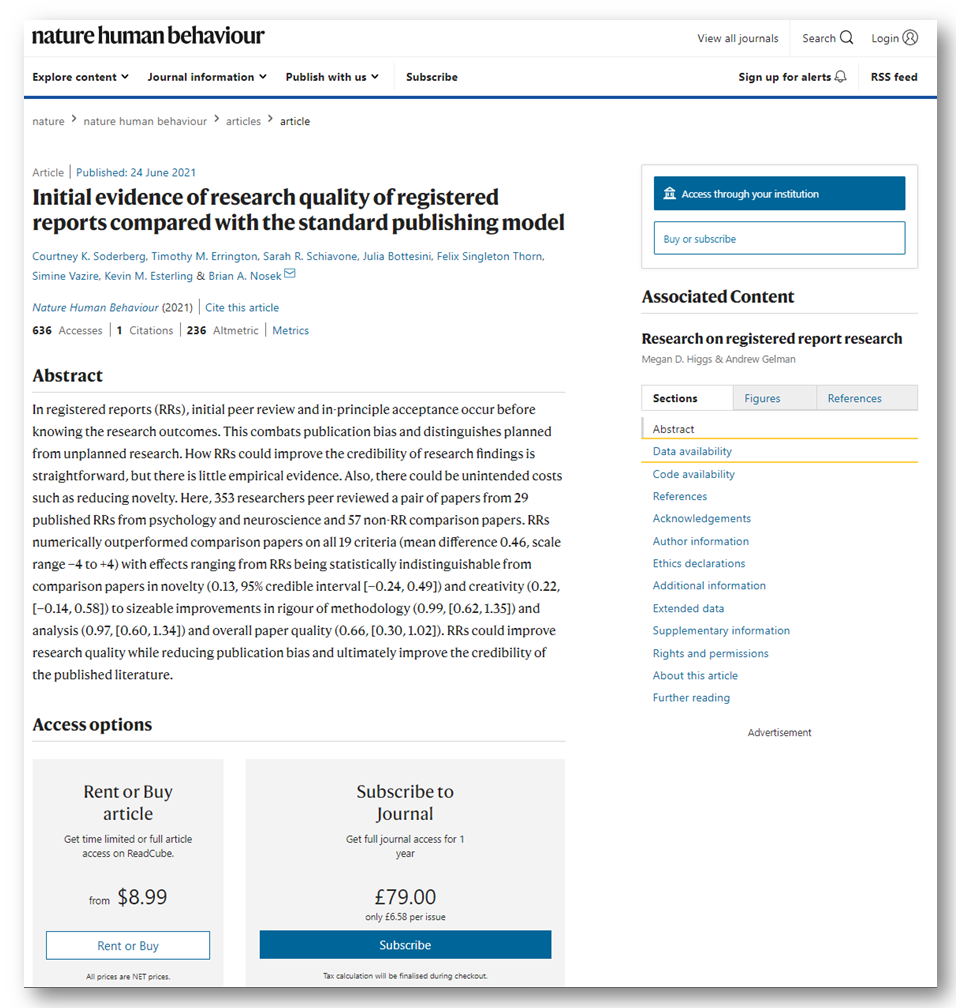 Sally located the article in the journal’s “Explore content – Research articles” page. On this page, articles that are Open Access (OA) are labelled as such. The article of interest here – the Soderberg article – is not labelled OA despite Sally having access (sometimes) via the PDF tab, and the Unpaywall “unlocked” symbol appearing for Danny together with the CORE Discovery symbol for Sally – both of which confusingly direct back to the current page.

Another example of a similar situation with “variable” access is described in this Tweet thread. Sally checked her access to the paper in question (Banks, G. et al (2019). Answers to 18 Questions About Open Science Practices. Journal of Business and Psychology. 34, pp 257–270) on both phone and laptop: access to the individual article via the journal home page was barred requiring payment or institutional authentication.

However, using a link pointing directly to the PDF, (note that in the URL the word “article” is replaced by “content”) the version of record of the paper was fully accessible with no authentication required on both devices. This is not the only article in this issue that displays this anomaly. The direct PDF link was also picked up by both Unpaywall and CORE Discovery apps.

It is perhaps generous to merely describe these inconsistencies of access as “confusing”.

There are other related scenarios where papers were supposed to be OA (and presumably paid to be made open) but were published behind a paywall, and also where library staff have discovered that articles included in their institutional OA deal have not been made open access on publication.

In many ways, the specific details of this situation are irrelevant. What does matter is the important points it raises:

From the baffling experiences described above, one concludes that not only is the assortment of access options confusing for readers but that major publishers are challenged to engineer and control access and authentication as they intended. Such examples validate the reasons why hybrid OA journals are problematic.

There is a significant effort associated with gatekeeping and preventing potential readers from accessing content, when research should be disseminated and read as widely as possible. This represents an increased cost in the production of publications – a cost which is ultimately borne by the subscriber or individual reader.

There is considerable evidence that open access articles are more read than non Open access articles. Indeed, even SpringerNature, the publisher of the article example above, states that “Open approaches accelerate the progress of science…. OA is immediately accessible and highly discoverable… Previous research shows the OA advantage for researchers: OA articles are cited on average 1.6 times more than non-OA articles, downloaded 4 times more often and attract 2.5 times more attention, as measured by news and policy mentions”.

Wouldn’t it be better if the money, time and energy invested by publishers in attempting to build a complex variety of access barriers were directed towards providing a consistent approach to access? Then the money, time and energy spent by researchers and libraries in paying for and attempting to access content, via confused and confusing interfaces, could be better spent on research. If authentication and access control are so challenging, and we all, including publishers, agree that Open Access is beneficial, then we need to abandon these types of attempts at gatekeeping, and instead focus on making all research publications easily openly accessible.

Sally Rumsey was, until July 2022, Jisc’s OA Expert working as support for cOAlition S in all areas covered by Plan S, especially the Plan S Rights Retention Strategy. Prior to that, she was Head of Scholarly Communications & RDM, Bodleian Libraries, University of Oxford. There she managed the University’s repository service for research outputs, Oxford University Research Archive (ORA and ORA-Data https://ora.ox.ac.uk). She was previously e-Services Librarian and manager of the repository at the London School of Economics. Sally remains a member of the UKSCL (Scholarly Communications Licence) group.

View all posts by Sally Rumsey 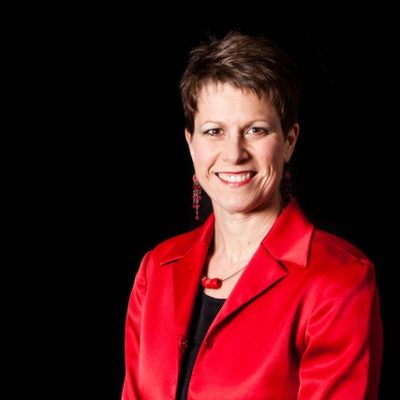 Dr Danny Kingsley is Associate Librarian, Content and Digital Library Strategy at Flinders University, having worked as a Scholarly Communication Consultant on her return to Australia. Her research as a Visiting Fellow at the Australian National Centre for the Public Awareness of Science has centred on scholarly communication with interests in the academic reward structure, scholarly infrastructure and open access advocacy. Between 2015-2019, Danny worked as the Deputy Director of Cambridge University Libraries (Scholarly Communication & Research Services). Before moving to the UK she established the Australasian Open Access Strategy Group (now Open Access Australasia). This followed on from working for four years as the Manager of Scholarly Communication at the Australian National University, a natural extension of her 2008 PhD into the range of ways different disciplines engage with open access. She has worked as a science communicator for 15 years, including two years with ABC Science Online as a journalist for News in Science.

View all posts by Danny Kingsley