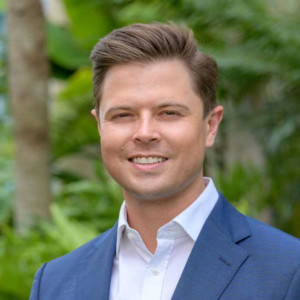 Dawid Potgieter is responsible for $70M of new and current portfolios of scientific research funding. In 2018, he launched the Accelerating Research on Consciousness initiative, which uses open-science practices to critically test scientific theories of consciousness. He subsequently launched projects that promote open science through infrastructure and training.

He oversees the foundation’s continuous improvement program, through which he launched new policies and grant-development practices that promote open science. Dawid is also a member of the Health Research Alliance, Open Research Funders Group, and an ex officio member of the National Academies of Sciences, Engineering, and Medicine’s Roundtable on Aligning Incentives for Open Science.

Dawid has a D.Phil. in Neuroscience from The University of Oxford. His research has been published in Proceedings of the National Academy of Sciences, Neurobiology of Disease, and Human Molecular Genetics. His work has been covered in Science, Financial Times, and BBC Science Focus.

Dawid, what is the one thing you appreciate the most about being part of the cOAlition S Experts Group?

As an organization that joined cOAlition S recently, we very much appreciate the wealth of knowledge and support within the Experts Group. They helped us understand the key requirements and consider all the factors. Thanks to their help, our policy is much more thoughtful and our grantees better off.

If you could have any superpower, which one would you choose and why?